Christians love Halloween, right? WHAT?! Oh, hold up a second. Christians say WHAT about halloween?! There’s no good in it? This is *not* in fact, a day that the Lord has made, and we shouldn’t be glad and rejoice in it? Hiding in the closet pretending nothing’s happening, you say? Uh, sure…?!

For years as a young adult I went through a questioning period about the morality of celebrating Halloween. I swung from “What could possibly be so bad about little kids in costumes and free candy?” to “OK, so basically, we’re going to hell for this”.

Here’s what I discovered just before Halloween last year: it’s actually maybe the best holiday of the year. Do you know why? Because it is celebrating the victory of God over evil. We dress up in those lame-o “scary” costumes to mock them, not to try to be them. We make a total and complete mockery of the devil. He is ridiculous. He is a weak, pitiful excuse for power and deserves to be mocked and laughed at forevermore. Thus, we revel in this. We celebrate the total and utter defeat of Satan (it’s a fact, peeps) by making a mockery of all he holds dear.

Trick-or-treating, dressing up, carving pumpkins. Some say it has its roots in pagan practices. Others claim the exact opposite. What’s true? Is it even relevant to our modern-day participation? Despite the disagreement, everyone can agree that the day after Halloween (November 1st) is All Saint’s Day. A day to celebrate the union of the saints with Christ. Kind of like a President’s Day or Remembrance Day where we remember many different people at once.

According to this source (a fascinating article) the word Halloween comes from All Hallow’s Eve, with the word ‘hallow’ meaning ‘holy’ or ‘saint’. Thus, it is simply the eve of All Saint’s Day.

Halloween As Celebration of Victory in Christ

The concept explained by the article linked above is enlightening.

The one thing that Satan hates more than anything else is to be ridiculed. As Christians we can do this because we know that he has lost the battle already. Dressing up as a devil or a ghost while laughing and knowing that evil has already lost is the best form of mockery.

By doing so we say to the demonic realm that we have no fear because we serve the victorious Jesus Christ who conquered even death! It is no longer to be feared!

What About the Non-Christian Version of Halloween?

I totally get that most people these days are not participating in Halloween as a celebration of Christ’s victory over evil. They revel in the creepiness and gore and evil overtones without a thought as to why. There may be some customs that have less than stellar roots and past uses. Yet as another fantastic article reasons:

Yes, it has a weird history (so did I before Jesus). Yes, it’s mostly about buying stuff (like everything in America). But for most ordinary people it’s just a silly holiday where kids have fun and we satirize things that normally make us uncomfortable. American culture doesn’t have any real answer for death or demonic forces. So, Halloween is just one attempt to cope with those fears.

Think about it – this really makes sense.

If you believe that Halloween is a celebration of Christ’s victory (as I do) and that people don’t really understand the true meaning (most don’t), then you are in good company.

It seems to me the same thing happens at another very important holiday. The one involving the Jolly Old Red-Suited Dude and lots and lots of shopping.

Yes, Jesus’ birthday has been sacrificed on the altar of consumerism by so many, and yet we don’t give up on it. We redeem it. We call it what it is, and we celebrate the Truth. A celebration of the incarnation of Hope, Joy, Love, and Peace. He has come, he has been victorious, and we can celebrate His grace and glory and power for ALL of our days!

Last year we dressed the kids up and had a lot of fun doing it. Our kids are still little (5, 3, and 16 months) so we keep it minimal. We trick-or-treated on our street then drove 2 minutes to trick or treat at Grammy and Grandpa’s house.

The worst house that we saw in terms of gore and yuck was my parents’ neighbours. The bloody skulls and severed hands and everything else was a bit much for me. Next year we’ll just avoid that house, and when they’re old enough to notice or care then we’ll talk about it.

Actually, let me clarify: we already talk about it in little kid terms. We just talk about general ‘scary things’ as having no power over us because Jesus is the winner and he’s on our side!

Halloween actually presents amazing opportunities to have some deep conversations with kids. I gave a basic explanation of death and evil, and how we are mocking the devil. The conversation will deepen as the years go by, but for now this is a great way to introduce the concept of principalities and powers to your children.

The worst part of Halloween, in my opinion, is the candy. I know, I know… harmless fun…? But really – that stuff is nasty. The ingredients in those things? Mostly unheard of and unpronounceable, high fructose corn syrup solids, artificial colourings that have been linked to behavioural issues in kids, and loads of highly processed sugar in all forms. A few ideas to minimize this, without opting out of Halloween altogether:

Does your family participate in Halloween? What are your kids dressing up as this year?

(I’ve got a leopard, a queen, and a firefighter!)

Parts of this post were edited and rewritten from the archives. 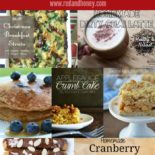 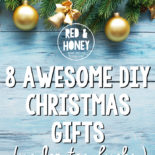 Using Symbolism to Teach My Children the True Meaning of Christmas 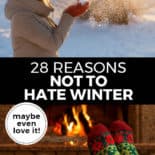 28 Reasons to Not Hate Winter 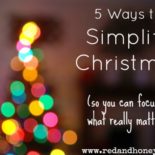 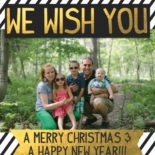 To You, Dear Reader, From the Red & Honey family: Some Thoughts on Blogging in 2014 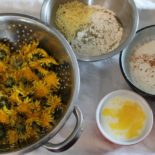 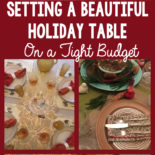 How to Set a Beautiful Holiday Table on a Tight Budget