Howdy neighbour. I am in the throes of a huge project these days with no spare time to tumble out the thoughts from my head into this space. Because, ya know, the sad lack of a time machine or official superpowers. Boooo. However! All is well, because my project is super-duper rad and I can’t wait to formally introduce you!

If you follow me on facebook you might have seen my subtle announcement in my request for recipe testers. Stay tuned for more exciting details, people. I’m just sayin’.

In the meantime, these are some links I’ve loved lately. They aren’t all from the last week since I’ve missed posting weekend links once or twice lately. A random note: it’s extra fun for me that I found some gems to include from some real-life friends that have blogs.

How Could You Fall So Far? @ KJ Tanner

Why Going Grain-Free Helped My Fibromyalgia @ The Sprouting Seed

On Respect, Responsibility, and Mrs. Hall’s Open Letter to Teenaged Girls @ Rage Against the Minivan

In other important news: my little dude turned five this week, and that might pretty well be the death of my conviction to never ever tell a young baby-mama to Cherish Every Moment Because It Goes So Fast. Because seriously, dude. It so does.

He’s grown-up and hilarious and smart and every inch mischievous and I just love every speck of his being. Tonight while cuddling and reading bedtime stories with him and Ally we were reading about Fire and Rescue Vehicles. On the ambulance page Aliza asked me why I took her to the hospital (6 months ago when she got “toddler’s elbow” during horseplay). Isaac was recounting the story for me: “When we lived in Aunt Becca’s house and I was just four and I was This Big” (holds up thumb and forefinger, indicating his height at approximately 3 inches). His big brown eyes are so earnest and twinkling I can’t help but laugh and kiss his face all at once.

That was about five minutes after the two of them were playing around with Daddy’s stud finder from the toolbox (it beeps when over top of a wall stud behind drywall). Daddy help it up to himself and it beeped at which he – of course – declared himself a total stud. Then he made it beep at Isaac (another stud) and at Aliza, and declared her a chick. A few minutes later Aliza brought it to “check” me, and when it beeped she declared me a chicken. Awesome.

On his birthday we went apple picking, which is my absolute favourite kind of u-pick. Maybe he’ll want to turn it into a birthday tradition?

And with that, I’m out. Back to project-doing and scheming.

One question for you to answer: does pumpkin really belong in coffee? Really? Go ahead, make your case.

This was the best shot of the thirty or so I took. It was worse than wrangling a bag full of angry cats. Theoretically, speaking. 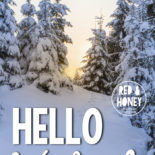